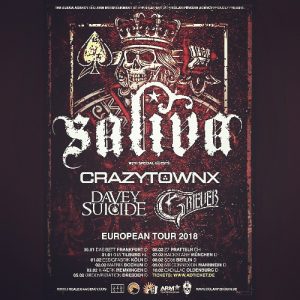 After a decade and a half, veteran multi platinum hard rockers SALIVA will take to the road on the European mainland with nine shows in Germany and one each in The Netherlands and Switzerland.

“The first two times we went across the ocean we were part of a Nickelback / 3 Doors Down package and then with Stone Sour,” says drummer Paul Crosby. “No one really knew who we were the first time but we won crowds over and had a much bigger audience there for us with Stone Sour.  We still have a lot of fans there, we just have to get back in their faces.”

The band has gone through some changes since their last trek across the water, adding new frontman Bobby Amaru, of course, in 2011, as well as former Shinedown and Fuel bassist, Brad Stewart becoming a full time member, joining band founders, guitarist,Wayne  Swinny and drummer, Paul Crosby.

Dates are as follows:

10 February – Oldenburg, Germany – Cadillac
Joining Saliva on this run will be Crazytown, Davey Suicide and Griever.