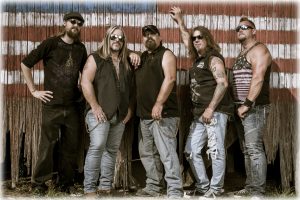 As Southern Rock reemerges, Indianapolis based outfit OUTLAWS & MOONSHINE throw their hat in the ring, loudly and proudly, unveiling their sophomore effort, Devil in the Moonshine, to the world in the fall of 2017.

With their DIY ethos in overdrive, the quartet independently released their debut Ep, ‘1919’ in 2015, earning critical and fan praise alike both domestically and on an international level. Doing shows across the Midwest and landing themselves on a few small festivals built the band’s fan base considerably as audiences experienced their hard driving live show. The band brought their ‘1919’ album cycle to a head in the spring of 2016 with a short tour supporting Jackyl and Wayland.

Mid October of 2016 found OUTLAWS & MOONSHINE back in Red V Studios in New York with producer Vic Rivera cobbling together what would become Devil in the Moonshine. “Vic is hands down the sixth member of O&M,” says frontman Beau Van. “The recording process was laid back yet driven at the same time. There were many long hours of ‘let’s do that again’ from Vic. He has faith in the band and has a complete understanding of our vision.”

Kicking off with the pounding title track the band immediately sets the bar high for the rest of Devil in the Moonshine. “This is about the whole concept of ‘the devil made me do it,’” relates Van. “I’ve been bitten by this more than once so I’m describing my ten foot tall and bullet proof drunk persona in the form of warnings from my pop – ‘That stuff turns you into the devil’ he would warn me.” Here Comes Bobby” is a song about brotherhood and loyalty … and a life that could only end one way. Next track up, “Don’t Be Scared” tells a story about that one friend who happens to be your partner in crime. That one person who allows you to be yourself no matter what. A mirror of yourself who gives you an excuse to “howl at the moon.” The mid-tempo ballad “Ride or Die” is the realization of a roller coaster ride of emotions about to surface when taking the steps that are best for you. “This one was about putting your boots on one at a time, walking that country mile, and taking that deep breath when you realize you made it out alive,” relates Beau. The driving “My Boom” rounds out the newer material on Devil in the Moonshine and is Beau’s “take on the perfect soulmate for an imperfect person. The right mix of the things that make the yin and yang complete. And shoving up a middle finger to all who can’t understand.” To round out the album, the band added the ‘1919’ recordings “just to make everything fuller,” say van.  “Besides, there are a lot of people we didn’t get to reach with those songs the first time around.”

‘1919’ put them on the map but Devil in the Moonshine is set to make OUTLAWS AND MOONSHINE a contender. Melodic, big, loud and powerful, the album is full of bravado and screams of a band ready to make their mark.