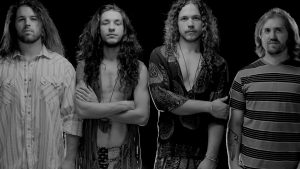 Cosmic Wool, from the heartland of America, Oklahoma City to be exact, formed in late 2013 by brothers Nevada and Rado Romo (both formerly with Nuclear Blast artists Anti-Mortem and Nevada currently also a member of Texas Hippie Coalition) along with John “Drew” Williams, who they met through mutual friends. The line-up was completed by Tom Frizzell on drums, after he answered an ad posted on social media.

Starting life as a jam band during breaks in the Romo’s touring schedule, the band soon took a front seat after the dissipation of Anti Mortem in late 2014,

The brothers left the metal world, with the company of Drew and Tom and toned things down with the release of Cosmic Wool’s debut three song maxi single / Ep, ‘Over Your Eyes,’ even going so far as to introduce electronics and keyboards into the mix.

Fueled by a soaring and energetic live show, the band worked the well tested Oklahoma market, taking their music to the masses, hitting the rest of the US mainland along the way. “We found a home away from home in Wisconsin, Minnesota, & Illinois,” says singer, Nevada Romo,” so we started requenting the thriving, and now more familiar scenes because it just made sense.” With Colorado & Texas always calling to have them back as well, “The Wool” realized they might be on to something by hitting these markets on a more continuous basis.

Experiment led to result with the 2016 release of the “White” Ep, making use of their cosmic-rock roots in the tune “Only Two” while focusing on more pop-centered vocal melodies in the haunting “What I’ve Been Up 2 All Alone.”

Character driven music with groove lines, dance breaks, and experimental guitar riffs. Cosmic Wool has gone beyond the industry standard “rock band,” the quartet can be best described as a unique mixing pot. “Some fans yell “SPACE-ROCK!!”, while others claim disco has returned when they hear our music. Fans can’t figure out how to pin the sound down, but they come back for more – it’s the only place the only place they know where to get it,” describes Rado.

The material on the band’s self-titled full length is a very personal affair and the culmination of years of tearing down and rebuilding. “Hole for My Head” is one of the tracks featured on the band’s debut Ep and is the bridge from the members past bands till now. “It was a pivotal point in the writing and a cornerstone early on,” explains Rado. The only song to have a music video done and played on radio, it is most recognized for the high, raspy vocal and desert rock momentum. “#Lonely” takes a smoother pop-rock, almost blue-eyed soul approach, while still falling in a similar vein. A clean, telling vocal intro wastes no time in delivering the atmosphere of a broken heart over a building guitar and synth, while “Only 2” takes a jump back & forth between both worlds: hanging out in the guitar rock universe, while also firmly planted in a drum and bass groove, the instantly memorable chorus vocal holds you there till it is launched to the top in a way only Rado Romo can do. The song comes to a climax with, arguably, the most gnarly guitar solo of young Nevada Romo’s career.
Cosmic Wool spent the spring of 2015 to the summer of 2017 writing and reworking the songs that would make up the full length, working with Chainsaw Kittens guitarist Trent Bell perfecting the sound they were looking for. “ We met Trent through another producer we’re friends with named Dustin “Provo” Provenzano who did the first Cosmic Wool demos as well as the Anti Mortem demos. Bell Sound is a huge facility,” points out the band’s frontman, “so we took full advantage of that and recorded most of the guitar, bass and drum tracks together in the same room. We also experimented with state of the art synths and keyboards to round things out.”

The record is anything but ordinary. A statement of raw emotion, raw riffs, and real life.
It can only be called “Rock & roll”. It is Cosmic Wool.