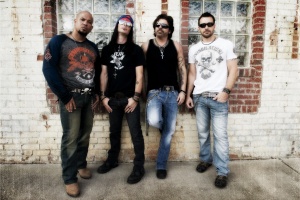 Nicknamed “FayetteNam” by the hundreds of thousands of soldiers since the Sixties stationed at nearby Ft. Bragg, this progressive Southern town in the hinterland of North Carolina embraces everything the American soldier lives and fights for: Home, Freedom, Girls, Cars, Rock ‘n Roll, but not necessarily in that order. Lately Fayetteville has reason to be proud about its hometown rockers.

Ferocious quartet, The Fifth may be new to the national scene, but since 2001, the full-throttled foursome has torn up the Southeastern US club circuit in support of two full-length CDs, plus a pair of Eps. The band’s debut longer player ‘Plead’ spawned the single “Lost” and put the band on the local GI radar, while their latest release Confessions of Man continues to propel the highly buzzed about band into even more impressive stratospheres. For starters, that project’s lead single “The Gift” raced up Clear Channel’s Rock 103 charts in Columbus, GA, positioning itself in the top ten right alongside Ozzy Osbourne, Tool and Saliva, thanks to support from the famed DJ Chaos and an overwhelming amount of requests.

While the journey is truly exciting to watch, it’s far from the first major accolade for the band to strike the pop culture radar. Over 18 million viewers of “Dancing With the Stars” likely caught the group’s recent soundtrack slot of the song “Even To This Day” on a “Grey’s Anatomy” commercial, while an immeasurable amount of viewers across the globe caught two separate Dodge Ram commercials in which the band was featured. Add in a Monster Energy band partnership, plus opening slots for the likes of Nickelback, Hinder, Breaking Benjamin, Sevendust, Puddle of Mudd, Saliva, Black Stone Cherry, Rev Theory (and others) and The Fifth is well on their way.

“The culture of the band is what’s special,”injects front man Roy Cathey, who first found fame as leader of MCA act Cold Sweat. “Our hometown of Fayetteville is a military town, which means people come see us and then spread the word all over the country. We’ve worked our asses off for the past seven and half years and we’re damn lucky so many soldiers take our music with them wherever they go.”

Like the good old days of the Crue, Guns N’ Roses, KISS and all the other riff-heavy heroes, The Fifth is committed to an incendiary live show that thrives on the personalities of all the players. While so many of today’s bands have become faceless and generic, this foursome packs plenty of charisma into an unrelenting electric upheaval.

“We pride ourselves as being a modern rock band, but we love the big shows of yesterday,”confirms drummer Darius Rose. “We have the sound of today, but with the connection of an old school rock show. Everyone lets themselves shine through on stage and you can tell we’re all having a blast letting our identities come through.”

Despite their larger than life personas, the band’s first priority when they hang up their instruments for the night is to meet fans on a first name basis. Not only is The Fifth comprised of the most approachable guys in the music business, but they’re committed to providing a sense of enjoyment and empowerment to everyone along the way.

“There’s a very broad worldwide appeal because everybody loves a good rock show, but they also want to relate to what you’re singing about,”affirms Roy. “We write songs people identity with and that can help put a smile on someone’s face, plus we throw a little sex, drugs, rock n’ roll and any other bit of debauchery in for some extra fun.”

The Fifth’svery moniker also embodies the genre’s core elements, inspired from Roy’s days as a strip club worker where he’d tally up the tips for dancers by counting with slash marks (which has since become the band’s symbol). But he’s quick to quip it could also mean “a fifth of liquor, the fifth commandment, the fifth dimension or pleading the fifth- it’s totally up to you.”

And that bawdy revolution of acceptance has translated to the band’s fan base swelling by the second, some of whom have branded their love for The Fifth in even more permanent ways than spray paint. “Little by little, we’re meeting people who have Fifth tattoos on their body,” echoes guitarist Icky Jim. “It’s a shared experience where there’s a sense of closeness that transcends the music to the point where our fans become our friends.”

Take for instance the time when the band’s trailer was stolen with over thirty grand worth of equipment on a Monday, but by the end of the week, members’ sponsors and fans who were fellow musicians lent everyone enough gear to be back on stage by Friday. One listener even threw in a five thousand dollar check to help recover the damaged goods, much to the band’s shock and simultaneously humble appreciation.

“We’ve been beating the odds since day one, but it’s because of our connection with the fans and the grassroots approach that keeps us going in this new age of the industry,” muses Cathey. “If anyone’s doing this for the fame and fortune, they’re misguided. This is about doing something you love and have a burning passion for, which means marching on no matter what happens and making the most of every experience along the way.” 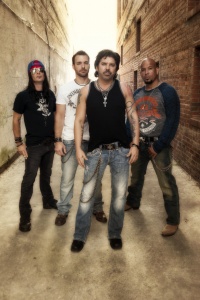