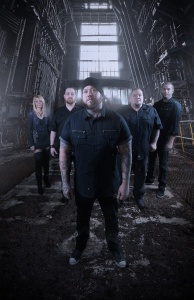 Jason Delismon put together Chicago based modern rock act Frontline after leaving his former band, A.D.D.(for whom he was the drummer) when his initial idea for a solo project grew legs and began adding members after writing sessions with guitarist, Mike Nowak. “It was just a writing thing at first,” relates Delismon, “and soon things just started to click and it became obvious that we needed to see this thing through.”

The quintet became a fully working entity in January 2016 and began hitting the local club scene just shy of a year later, after working through all the necessary kinks and endless rehearsals in order to get things just right. Acceptance was swift and measured and Delismon knew that following through with a full band was the right idea. “We had a buzz right out of the gate,” recalls Jason. “There was a great amount of hype which was basically organically created.”

Entering Chicago’s AMG Studios in February 2016, the band spent six solid months working on Cold World with producer Mike Brezen. “Mike was just a logical choice for us. He has an outstanding facility and his attention to detail and work ethic are both fantastic,” says the frontman.

Opening with the album’s lead single, “Follow” (about losing a loved one) the title track follows in quick succession and addresses one of life’s lessons to learn – the subject of cheating. “We’ve all had this happen to us at one time or another and it’s never pleasant,” says Jason. “I figured we’d confront the subject and get it out of my system.” With “Don’t Misunderstand” the band takes on the doubters of the world and with “Changes” the subject of new opportunities is tackled. “This one just stemmed from my decision to move from behind the drums to a more focal point, singing and playing guitar, both of which I’ve also been doing for quite a long time, “Delismon elaborates.

With a hundred bands seemingly popping up every week and social media giving everyone immediate marketability options, competition has never been more fierce for an audience’s attention span, which as Delismon is quick to point out, is shorter than ever. When you’ve got the goods, however, you have one leg up on your competitors. Jason sums Frontline up, “We write memorable songs that people can relate to and we have a positive message, which kind of goes against the grain these days.”